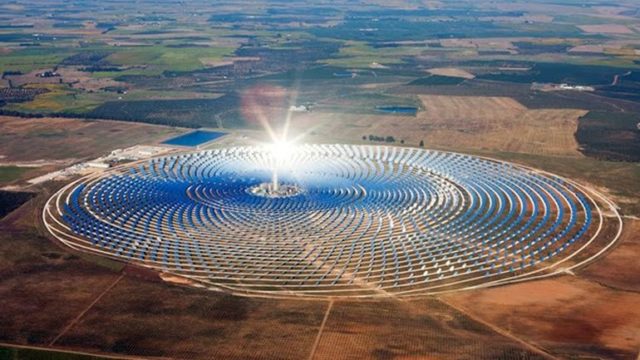 BLOG: HOW MOROCCO TURNED THE SAHARA DESERT INTO POWER

This weekend sees the Moroccan city of Marrakesh host the second round of the FIA Formula E Championship. It’s the third consecutive year the city – dubbed the Red City due to the colour of the high walls that surround the ancient medina – has staged the all-electric series, first beginning in 2016 as part of a tie-up with that year’s COP22 event.

For sure, hosting a sustainable motor racing event might not be something you associate with this ancient city – more likely its colourful medinas or spectacular Atlas Mountains – but Morocco has a few surprises in this area.
That’s because Morocco is currently putting the finishing touches to the world’s largest concentrated solar power farm.

The site near the city of Ouarzazate (pronounced “Wazazat”) – famous as a filming location for Hollywood blockbusters like Gladiator – aims to produce enough energy to power over one million homes and reduce carbon emissions by an estimated 760,000 tons per year. That could translate to a reduction of 17.5 million tonnes of carbon emissions over 25 years.

The plant is part of a three-phase project, first opened in 2016 by Morocco’s Crown Prince.

The solar plant, called the Noor complex, uses concentrating solar power which is more expensive to install than the widely used photovoltaic panels, but unlike them, enables the storage of energy for nights and cloudy days.

Mirrors focus the sun’s light and heat up a liquid, which, when mixed with water, reaches around 400 degree Celsius. The steam produced from this process drives a turbine and generates electrical power.

A cylinder full of salt is melted by the warmth from the mirrors during the day, and stays hot enough at night to provide up to three hours of power, according to World Bank, who financed construction of the plant with a $400 million loan combined with $216 million provided from the Clean Technology Fund.

It is hoped that the project will positively impact the surrounding area. Approximately 583,000 people live in Ouarzazate town 10km (6.2 miles) from the site.

As of last year, fossil fuels accounted for 97% of Morocco’s energy usage. But having hosted the UN climate change conference in November 2016, the country has been making changes big and small to alter this. For instance, Marrakesh has already introduced a cycle-share scheme – Africa’s first – and now this much bigger step is something that’ll create genuine change in Morocco. Not only will it lower carbon emissions, but the solar plant will also increase the share of renewable energy in total electricity generation from 13% to 42%, according to the Climate Investment Funds (CIF).

Morocco has quite the lofty long-term goals, too. By 2030 it aims to supply most of its energy from renewables. And with such worthy intentions, and so much else on offer, Formula E is not the only reason to visit this fantastic country.