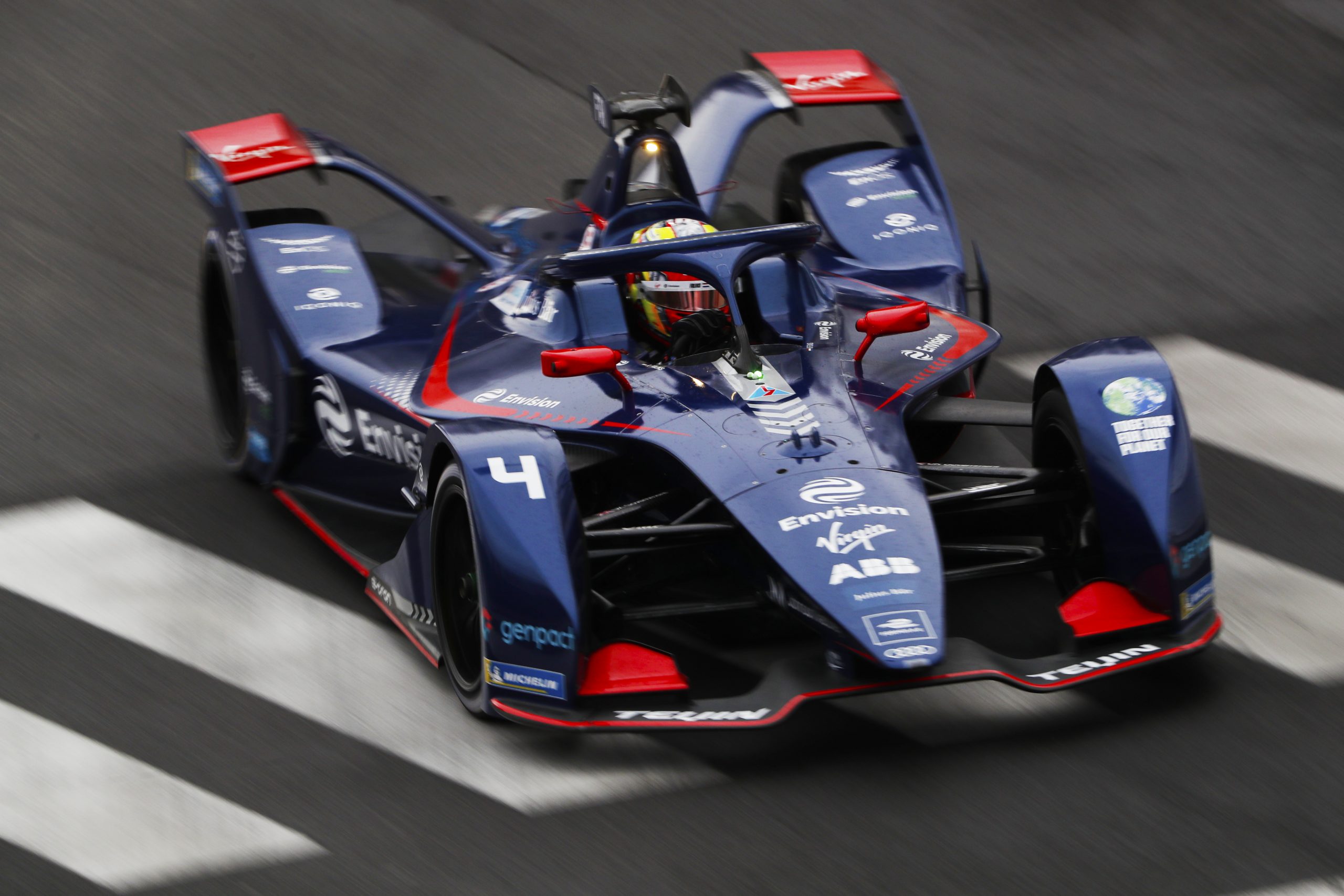 For the first time since 2016 Formula E will hit the streets of London and make history with the first ever part-indoor top level motorsport event. Can Envision Virgin Racing win on home soil?

Fresh from two memorable races at the New York E-Prix, where Envision Virgin Racing’s Nick Cassidy bagged another pole position and another podium, it is onto another iconic city, another doubleheader weekend, and another truly evocative setting. 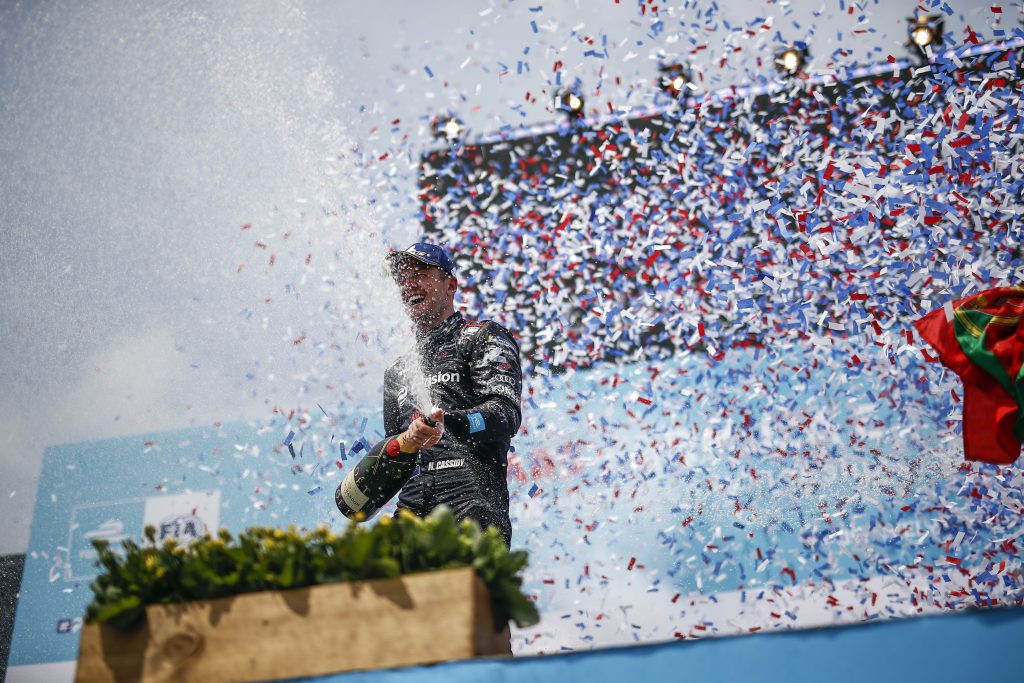 For the first time an E-Prix will be held outdoors and indoors, taking in the Royal Victoria Docks in London. Drivers will run along the River Thames’ waterfront and the 22 emission-free Gen2 Formula E cars will battle both inside and outside of ExCeL London, a major exhibition and international convention centre.

As well as the exciting new layout, there is plenty of other stuff to keep an eye on as the drivers’ and teams’ titles reach a crunch point. Envision Virgin Racing’s Robin Frijns overcame qualifying adversity in New York City to score vital points and heads to London just five points behind championship leader Sam Bird.

“We’ve done some simulator work for London and the track looks a bit different, quite tight overall and quite narrow in some areas”, said Frijns. “We also have the 4Kw reduction to avoid flat-out racing, but I am not sure that will be enough. We now have both cars in Group 1 so it won’t be easy to qualify in front and, looking at the track layout, overtaking will be quite difficult; so qualifying will be important, as always. If we manage to start somewhere around P10 I think we can fight for the points, but I don’t think that starting from the back and finishing in the points will be as feasible as it was in New York. However, anything can happen in Formula E.

“With some parts of the track being very narrow I think we will see some crashes, some mistakes from all the drivers. We’ll also be driving in and out of the track and, of course, we don’t know what the weather is going to do, but it could be half wet and half dry. The track surface is different inside and we could have more grip or less grip there – we will need to figure that out when we’re on site. But it’s going to be quite interesting I think, with very close lap times in qualifying and also during the races, so we will definitely need to fight for every split second we can gain.” 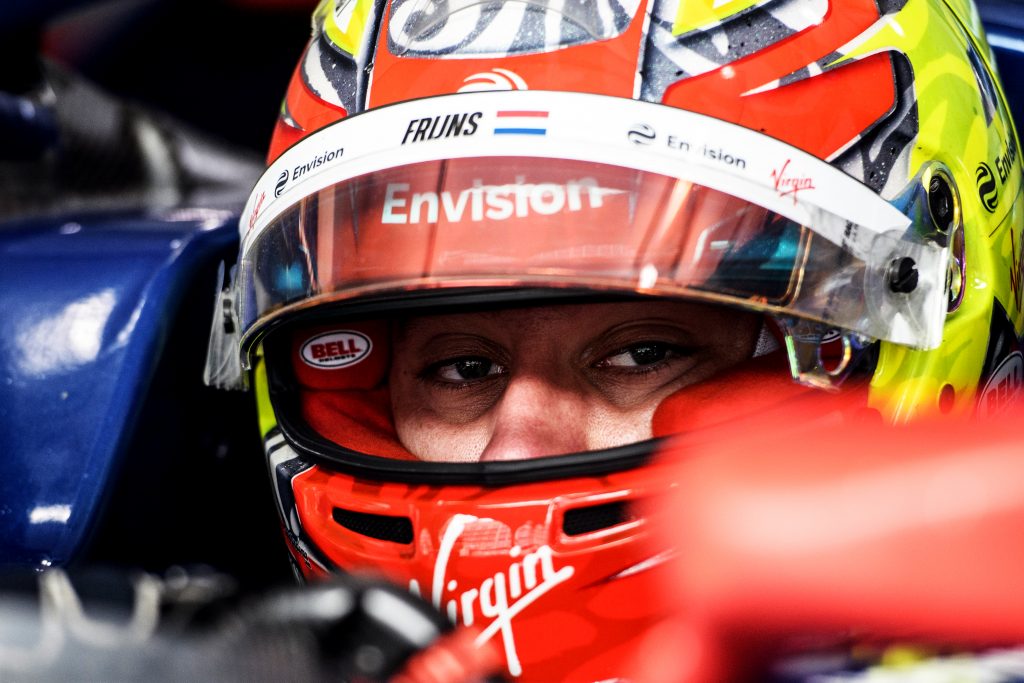 THE LONDON E-PRIX: FROM PARKLAND TO DOCKLANDS

Formula E first made its mark on the UK capital in the sport’s inaugural season back in June 2015, in the city’s beautiful Battersea Park on a 1.8-mile layout. In race two there was success for Envision Virgin Racing as former driver Sam Bird claimed a memorable home win and, one year later in race one of 2016, race Jean Eric Vergne scored a third place for the team.

The new London circuit could not be more different. Gone are the trees that lined the old circuit; instead, the drivers will be racing amid a post-industrial landscape of manmade docklands and, for the first time ever, inside the ExCel London building. Home of boxing, fencing, wrestling, and table tennis during the 2012 Olympics, it will now play host to the one of the most competitive forms of motorsport in the world.

In his rookie Formula E season, Envision Virgin Racing’s Nick Cassidy goes into his first London E-Prix on the back of a couple of breakout weekends. Following on from a maiden podium at the Puebla E-Prix in Mexico, Cassidy took pole position for race one in New York City followed by a fourth-place finish, and in race two qualified third and claimed a stellar second place after a measured and mature race. 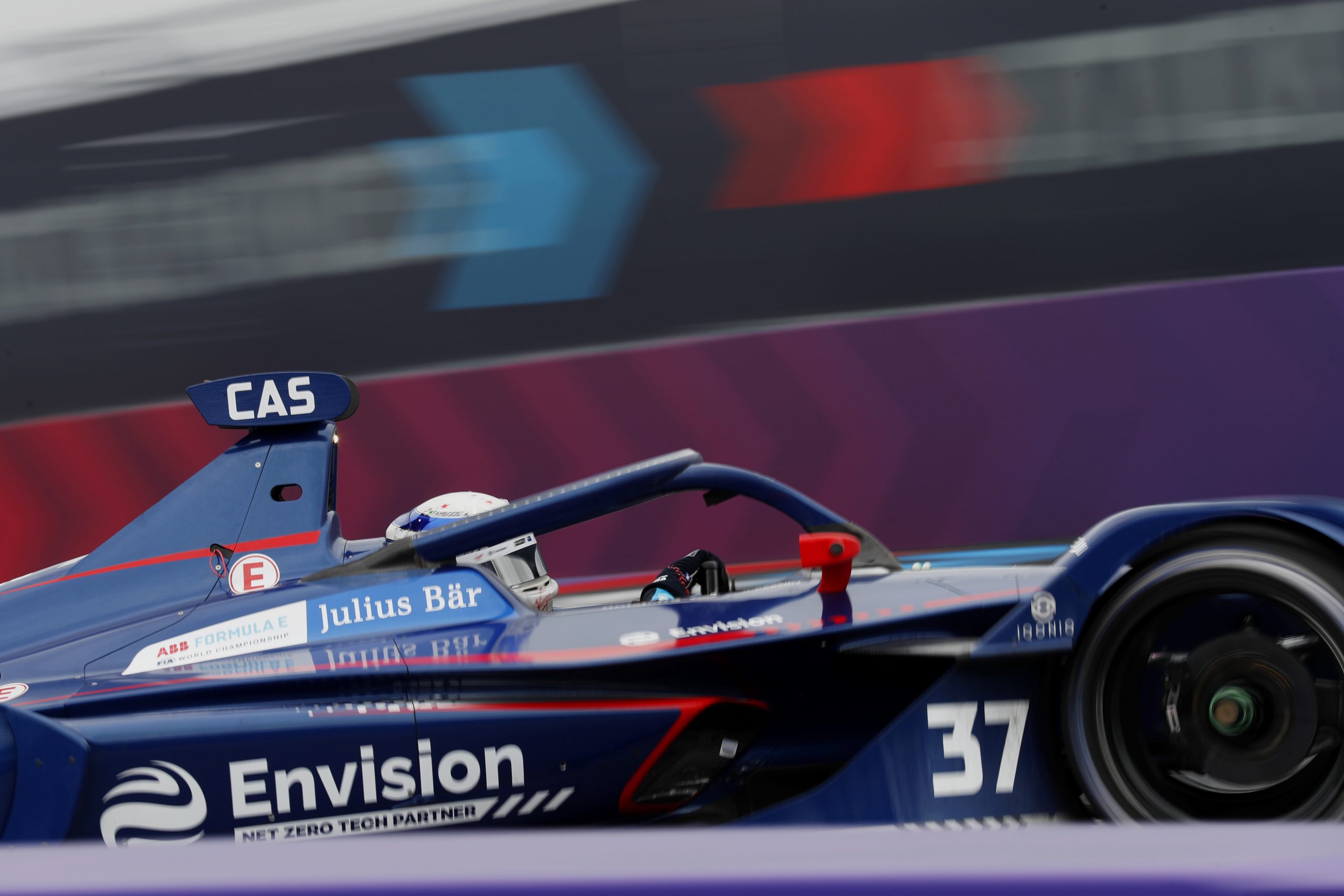 “I’m Looking forward to the London race,” confirmed Cassidy. “It’s obviously the team’s home race and it’s a lot about our guys and girls as well, so should be an exciting one. It will be a new experience for Formula E and to come here leading the championship as a team is fantastic.

“I think we have some real momentum going but the next few races are for sure going to be really tough. With regards to the circuit, I don’t really know what to expect – I think it’s pretty different to what we’ve had so far this year, but any track in this championship is a challenge. We’re always up for a challenge, though, so that’s all good for me!”

THE ENVISION VIRGIN RACING INSIDE TRACK

Making motorsport history will be the last thing on the drivers’ minds as they take on the new London layout. Starting under the roof of the ExCeL arena, the new 1.39-mile layout features a reversed hairpin in the middle of the lap and a tricky complex section at the northern end of the of the circuit, located between the Custom House and Prince Regent London Underground stops. Drivers will have to negotiate a second hairpin in the final sector as the course follows the perimeter roads back towards the Connaught Bridge.

After a tight left and right followed by a chicane at Turns 19 and 20, the cars will head back under cover in the ExCeL Arena where the pitlane and starting grid will be located. It is going to be a new experience for everyone involved in the championship, and with just 22 points separating the top 10 drivers and just five points between the top three teams, the two London races will be key to deciding both championships. 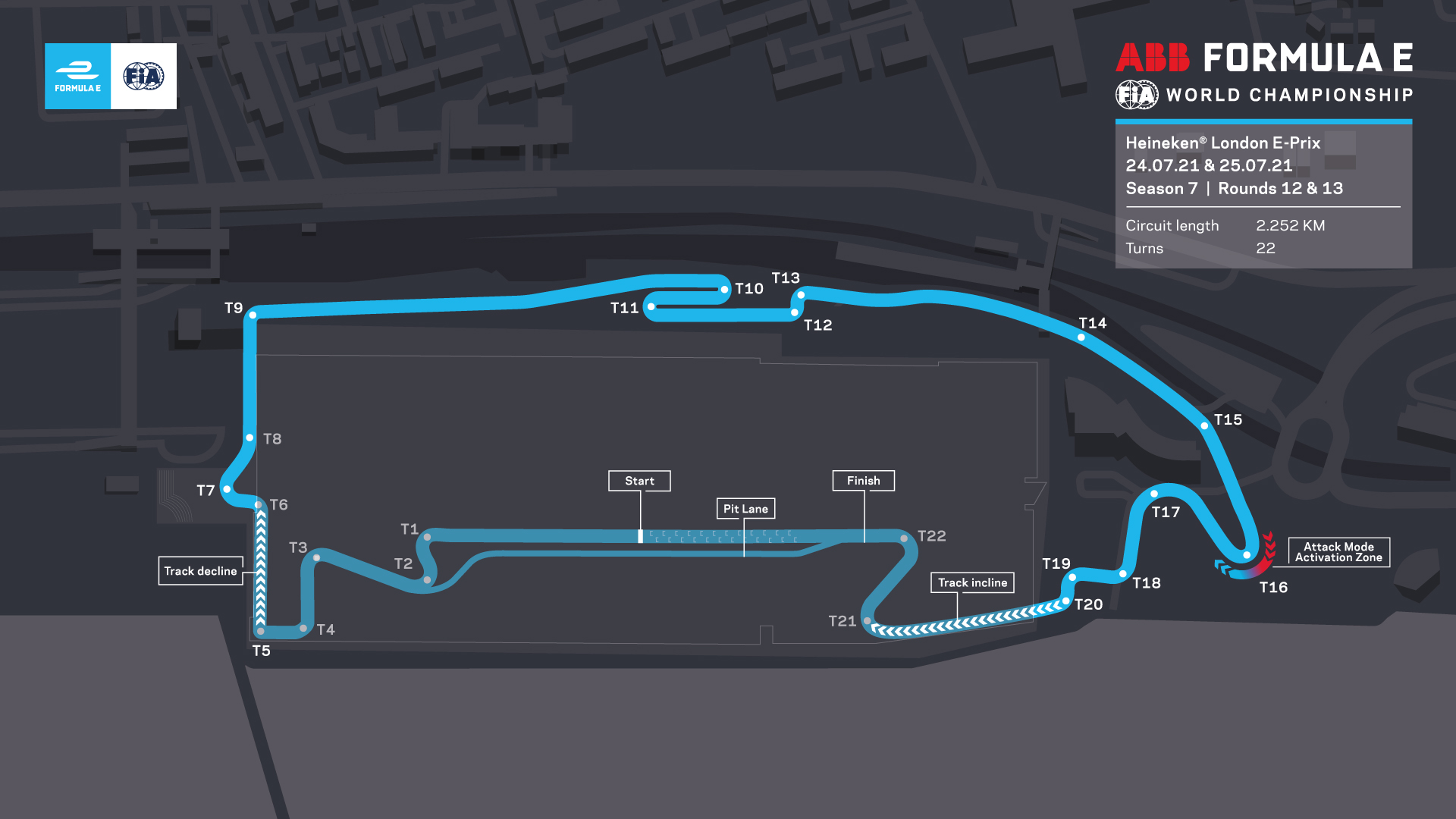 Sylvain Filippi, Managing Director and CTO at Envision Virgin Racing, commented: “It is great for the team to be back racing in London. This race is doubly important for us – it is not only our home race, but it also marks the announcement of the UK Government’s plan to decarbonise every form of transport by 2050 and phase out fossil fuel vehicles by 2040, which we helped Transport Secretary Grant Schapps reveal a few days ago. We are committed in supporting this project through our partnership with the UK Government and their ‘One Step Greener’ campaign leading up to COP26, which we are also a partner of. These initiatives are central to Envision Virgin Racing – they are part of our ethos and one of the many programs that we are working on within our Race Against Climate Change campaign.

“In terms of the race, I think it will be very challenging but, of course, it is a real bonus to head into the weekend leading the teams’ standings. Both the teams’ and drivers’ championships are extremely close, and it is also the first-ever Formula E race with parts of the track set in an indoor environment which adds another level of unpredictability to a racing series where anything can happen. But we are definitely prepared to tackle these challenges and are heading to London with a very positive mindset following a great weekend in New York. The team is in a very good place, so we hope that both Robin and Nick will be able to score some valuable points again and to be in contention for the championship in the final two races in Berlin. It is going to be a very tense weekend, but I am confident that we can achieve good results on both days.”

You can do more than just watch – you can also play your part in helping the team by voting for Nick Cassidy and Robin Frijns on FanBoost here: https://fanboost.fiaformulae.com/