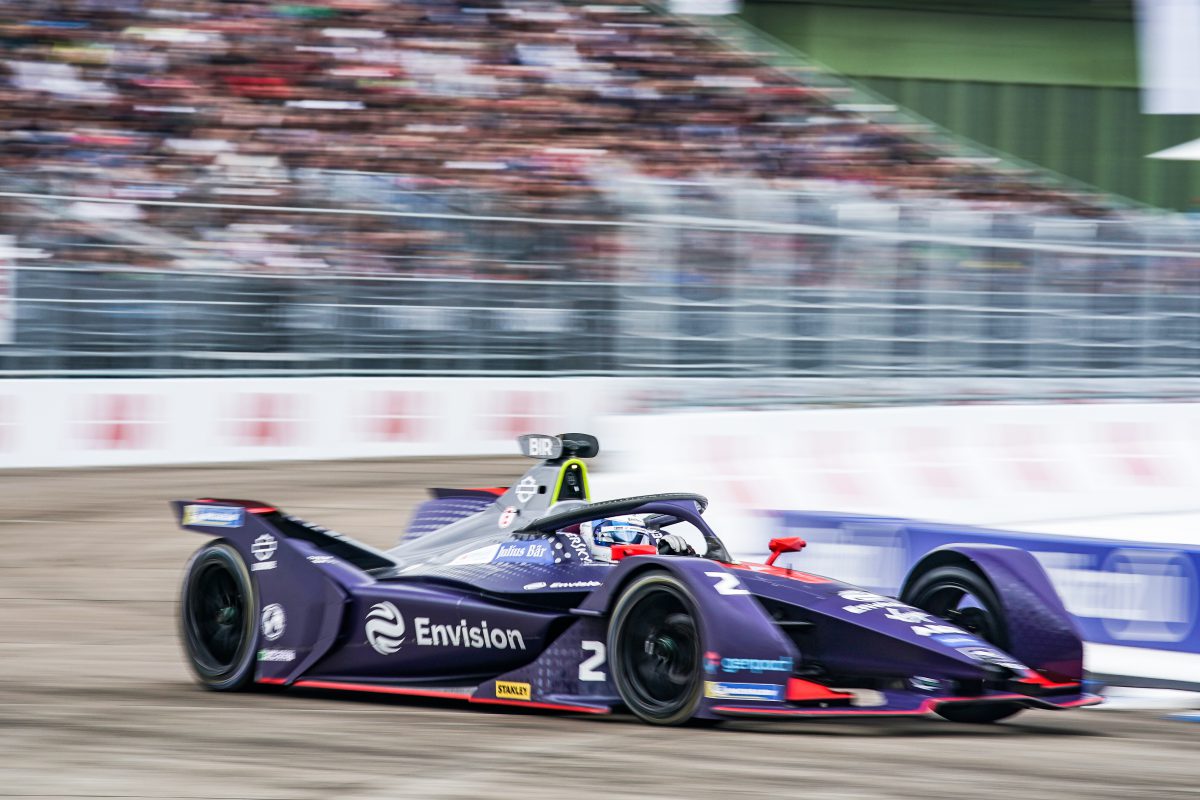 We had a little bit of a frustrating weekend in Berlin despite getting a few points and adding to our season tally, but naturally we always aim to come away from races with much more.

Overall, the race was much calmer than previous events and to make up four places from the 13th position start was quite satisfying considering all the circumstances.

The Envision Virgin Racing team did their usual fine preparation and we had good simulation work behind us as we arrived at Tempelhof.

The nature of the track is obviously very distinctive and actually pretty unique for Formula E. This is mainly due to the surface which is a combination of concrete and asphalt, so it is pretty quirky from a tire performance perspective.

Berlin hasn’t been especially kind to me in the past with a couple of seventh places. So, when you get tracks like this you really want to get a result.

Before I arrived at the track I was lucky enough to attend the new Formula E documentary film premiere ‘And We Go Green.’

It was a very special experience attending the Cannes Film Festival. The picture was produced by Leonardo di Caprio who is an actor I have admired ever since I was a kid.

His filmography stands as one of the greatest of all time in my mind.

It was a little bit surreal being there with stars like di Caprio and also Orlando Bloom who is a fan of Formula E after attending the Marrakesh E-Prix in 2018.

Along with Lucas di Grassi, Jean-Eric Verne, Andre Lotterer and Nelson Piquet Jr. we got to face the paparazzi’s flash bulbs which is not something you do every day, so it was mega cool.

I got to know the directors (Fisher Stevens and Malcolm Venville) well, as they interviewed us all and tracked our progress throughout the fourth season of the championship from 2017-18.

What they have delivered is a very special portrayal of what Formula E is all about and why the messaging behind the sport is absolutely critical.

These days we race for both the sporting ethic but also a much wider reason which is to highlight efficient sustainability and a more responsible approach to our sport and life in general.

Make sure you see the film when it’s released, you’ll love it.

Like I said, qualifying was tough and we need to go back to base and evaluate our performance.

I hadn’t managed to run a lot during the second practice session, due to an issue with the car, so I was fairly conservative on my qualifying lap but I couldn’t have given much more.

It was clear that we were unable to challenge to get in to the Super Pole session and so we just had to achieve the best we could which was 13th.

But, you always know that in Formula E anything is possible in the races even though Berlin doesn’t present as many variables in mixing up the order as other circuits.

The race was held a little bit earlier than usual and immediately the pace actually felt good in the car. I was able to make some progress by overtaking Edoardo Mortara and Pascal Wehrlein in the first half of the race.

The energy saving laps we had to do went to plan and actually was one of the pleasing aspects of the race for me. However when we did flat out laps the balance wasn’t quite right and we lost some time but this will be one of the major points of our debrief and we will work hard to get this right.

Once I got past Wehrlein and then Alex [Lynn] dropped out we were in ninth position. Maybe we could have snatched eighth I don’t know but honestly we probably got the maximum with the package we had last Saturday.

We were also a little unlucky when the Full Course Yellow was deployed and it compromised us slightly but as I always say we can’t look back and blame things like this, we just have to keep on pushing because we know that as a team we are winners.

The Envision Virgin Racing team was again superb and although a little momentum has been lost for various reasons in recent races we will be pushing mighty hard in the final three races to consolidate and then better our current third position.

It was also great to have so much support from all our partners this weekend and to be joined by Lei Zhang, CEO of our majority team owner Envision Group.

From what I have heard about Bern it will be a pretty incredible track with lots of undulation and challenges for the drivers. I can’t wait to attack it.