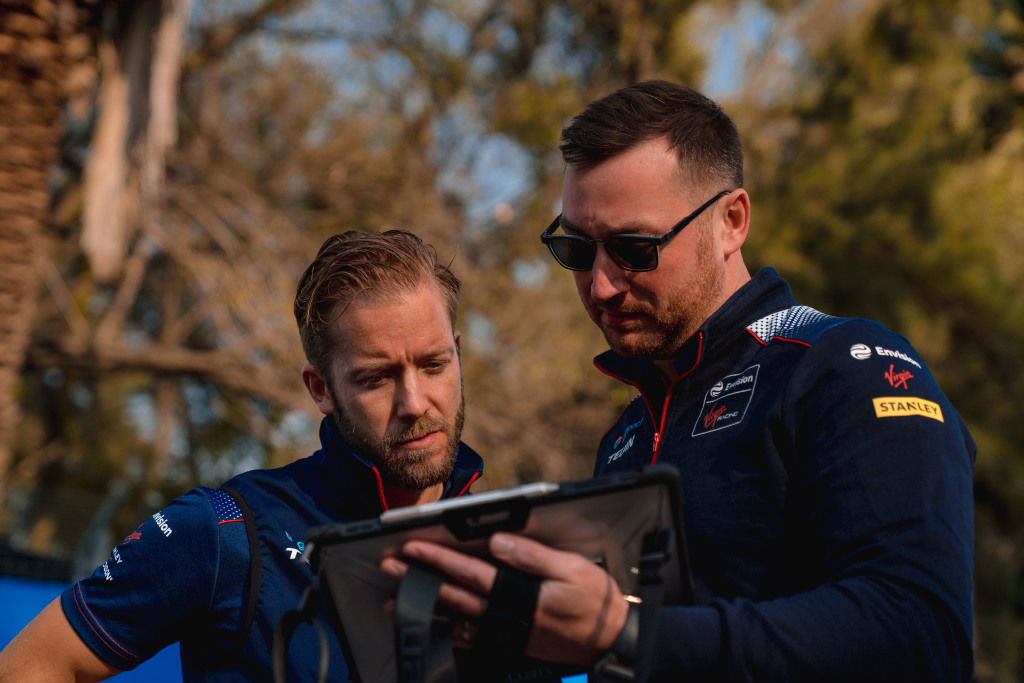 STEPHEN LANE: THE VOICE OF REASON

Every wondered how to become a motorsport race engineer? Or what the job entails? We caught up with the ‘Eyes Forward’ legend and man on the radio to Sam Bird, Senior Race Engineer Stephen ‘Laney’ Lane to discuss.

How did you get involved in motorsport?
My parents were the main factor for me getting involved in motorsport – my dad worked as a mechanic for an Aston Martin team and my mum is a huge motorsport fan so I was surrounded from both sides. I went along to a lot of races when I was younger and then when I was eight I started karting myself and then racing when I was 10, and it turned out I was reasonably good – I’ve even raced against some Formula E drivers, such as Piquet Jr and Sarrazin. I won a couple of British karting titles and made my way up to Formula Ford. Racing is expensive though and when I realised I didn’t have the funding to compete at the level I was capable of I decided I’d like to work on the other side, as a race engineer.

How did you become a race engineer?
I studied Mechanical Engineering at Coventry University and started a race engineering role straight out of university, at the age of 21 which is pretty rare. I’ve spent a lot of my career working in Formula 3 but I’ve also worked in Formula 1 briefly, as well as other championships such as GP2, Formula Renault and Porsche Supercup.  I actually started out by mentoring/race engineer in karting when I was about 14 – that gave me some great insight into the role of a race engineer but also allowed me to get my hands dirty a bit, as there’s a lot of work to be done on the kart.

Why did you want to work in Formula E?
There were two main reasons that attracted me to the championship, the first being the quality of the drivers. I truly believe that FE boasts the most competitive driver line-up in the world, each driver has really fought to be here and have showed their racing calibre throughout their career. The other reason is that FE looked quite different to anything I’d worked in before, I really like the idea of a new challenge. FE really hasn’t disappointed on either of these fronts, it’s exactly what I hoped it would be, I’ve learnt a huge amount from the three seasons that I’ve worked at Envision Virgin Racing.

Why Envision Virgin Racing?
I’d spoken to race engineers that I know at other teams and FE had always been something that interested me but it was actually Alex Lynn that got me into Envision Virgin Racing. He was looking for a new race engineer when he signed with the team for season four and he asked if I wanted to be involved. The more I heard about FE and its growth, the more appealing it became to me so I joined as his race engineer right at the beginning of the season. Envision Virgin Racing still has a small team mentality – everyone is willing to help each other and learn from each other and this was something that was very important to me before I started, I don’t think you’d get that at some of the larger OEMs, and I genuinely believe that contributes to some of our race wins. Every single member of the team works together, whether that’s the mechanics and the engineers on the track or engineering and PR working together off-track, everyone has a role and we all work well together. I’m lucky enough to say that I enjoy going to work every single day and that is truly down to the great bunch of engineers that I work with – everyone puts in 100% and we all get on really well. The support from the team’s fans is second-to-none also and you can see that across their social channels – my mum is even an active fan of the team on Facebook!

What does your job entail?
I started the team as a Race Engineer, running Alex Lynn, but I’m now the Senior Race Engineer – this means I’ve got a greater oversight of the entire engineer team, I help manage the day-to-day running of the team and then report in to the Technical Director, Chris Gorne. On a normal race weekend my role is all about making sure everyone is communicating – I’m managing the driver, the car, the crew and the other engineers working on that car. I’ve got to make sure that every piece of the puzzle, that we’re all working on, are put together so that the car goes out on time, it’s compliant, and that everyone knows what’s happening. When I started in FE there were a few differences in my job compared to any other championship I’d worked in so it took some getting used to! For instance, our performance engineers solely make decision about the changes to the car, which is a job I’ve always done before.

Does having a good relationship with your driver help in the job?
I don’t think it’s a help, I think it’s an absolute necessity. If you don’t have that relationship, then it’s very difficult to work together and get the best out of each other. I think you have to trust each other and really get on, otherwise the dynamic just isn’t there and it’s incredibly difficult to work and ultimately get the best out of the car on either side. You have to be able to have a constructive conversation with both your driver and the team, if there are any grudges or unsolved disagreements then the whole relationship is destined to fail. 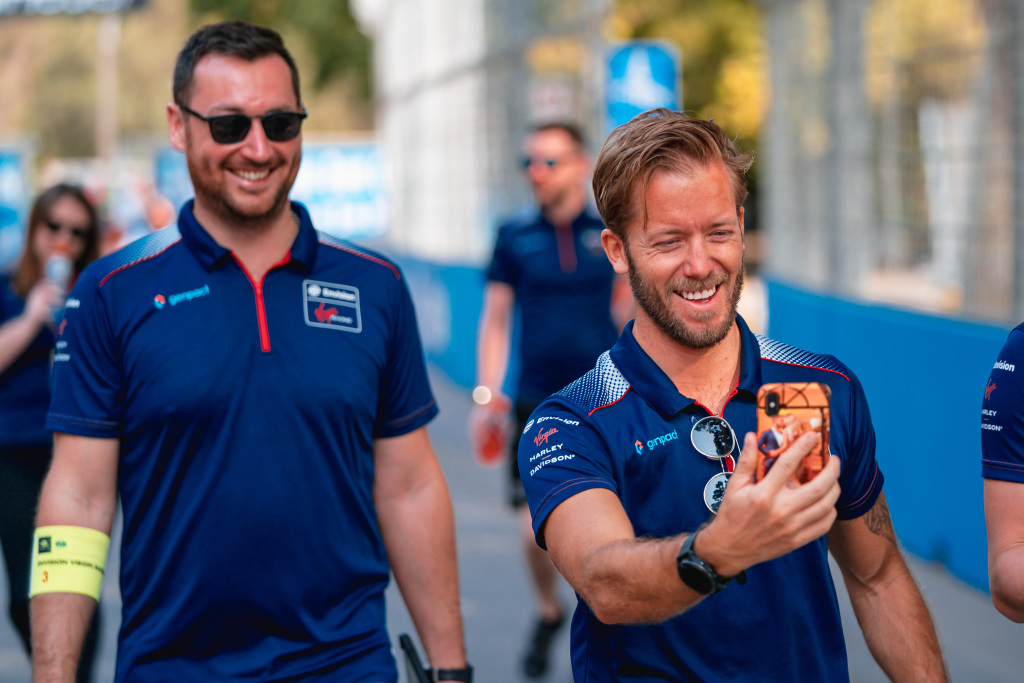 Does your own experience in karting help with the role?
From a driving point of view, you really understand what the drivers are telling you – whether that’s feedback of the car, track, conditions – and it means you have a stronger trust between you. We’re very fortunate that both Sam and Robin are great at giving feedback but not all drivers are able to articulate what they’re trying to get across, so it allows me to dig a bit deeper into a driver’s thoughts. I also appreciate how hard it is so when I’m making decisions – I can see both the engineering and the driver point of view – it just makes communication a lot easier but it also helps me to know if a driver is lying! When I worked with some younger drivers, they’d often make comments about the car or the track and I’d know they weren’t true – luckily, we don’t get that with our pair!

We’ve obviously seen some of the highs for the team, but are there any lows in the job?
When you know how many hours you’ve put into a race and you see a very good race result slip through your fingers, it’s even harder when a result is taken away – not necessarily through anything you’ve done. It’s the potential high of having a great result, and then 15 minutes later you’re at the bottom of the pack, that’s hard. Everyone is devastated because you’ve come away with nothing and it’s so hard to swallow when you know how many hours preparation have been spent on those 45 minutes of racing – it’s probably the championship with the most preparation time I’ve ever worked in, so it’s incredibly difficult. Every result will effect each team member differently though so it’s all about coming together as a team and looking forward rather than at what could’ve been.

As a team, we’re very much a two-car team – we’re not just split by a side of the garage and every single member of the team wants points, no matter which driver is scoring them. We win and we lose together, and I think that’s very apparent when we have those high and lows.

You’ve become infamous for your radio catchphrases in Formula E – where did you get those from?
It’s really an evolution of what my dad used to say to me before I started a race so with Sam, at the start of every race I say, ‘Have a think, keep it smooth, enjoy it and I’ll see you at the end.’ Eyes Forward was definitely not intended to become a catchphrase, it was all about keeping Sam focussed when he’s on track, but it’s been picked up a fair bit and we’ve had a bit of fun with it! I think sometimes we forget that we’re also meant to enjoy what we do and, whilst it is a serious business, at the end of the day Formula E is a sport and it’s here to be enjoyed.

It sounds like a pretty stressful job, how do you relax when you’re away from work?
It can be at times, we put a huge number of hours into each race weekend so when I’m home I enjoy spending my downtime with my wife and cat at home and with my wider family on the weekends. As cliché as it is, I also enjoy playing golf with my friends – I’m definitely not a pro but I’ve enjoyed the odd game with Sam and Vernon!